A new vein system discovery, named the 222 Zone, was identified at Hole NB-13-222 and indicates the potential for another major high-grade system within the resource expansion area. Hole NB-13-222 was drilled to a depth of 375 metres and represents the deepest hole drilled at the North Sierra Blanca area. Significantly, the lower intersection of NB-13-222 ended in mineralization (12.2m @ 1.14 g/t gold & 2.08 g/t silver) which was associated with extensive quartz stockwork veining similar in character to the proximal stockwork zones around the high-grade feeders of the Yellow Jacket Zone 200 metres to the east. Subsequent core drilling is being planned to further delineate this newly discovered vein system.

Hole NB-13-224 intersected 24m @ 0.63g/t and 30m @ 0.53 g/t gold and shows the potential as exploration moves north. Mineralization in the new NSB holes is hosted primarily a in rhyolite dome feature which is a more favourable host rock for vein development and distinct from the Crater Flat Tuff hosting the lower grade deposit to the south in the current Sierra Blanca deposit. Â In addition, holes NB-13-221, NB-13-222 and MB-13-224 each encountered vein related mineralization in structural zones with >10m of approximately 1 g/t gold expanding the feeder vein targets in the north area.

Jeff Pontius, Chief Executive Officer, states: “These new encouraging results which represent only 5 of first 20 holes planned for this area, continue to reinforce the expanding potential of the North Bullfrog property. The occurrence of multiple structural zones with significant veining and higher grades is highly encouraging for defining more Yellow Jacket type zones in the future which could fundamentally enhance the grade of the overall deposit and its valuation.”

*Intercepts calculated with 0.1g/t cutoff and up to 3m internal waste. Assuming that the mineralization is roughly stratiform in character the intercepts are approximately true thickness. All holes are vertical. 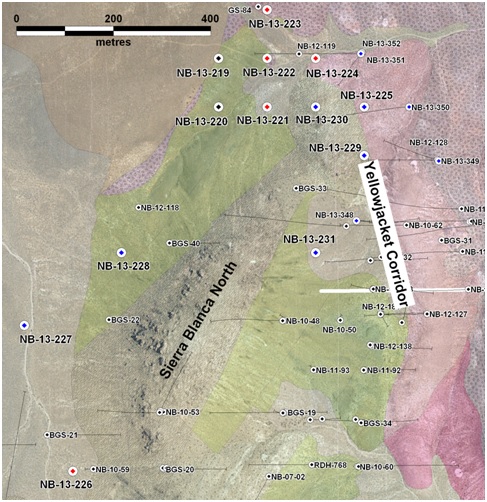 Figure 1: Location of new reverse circulation at North Sierra Blanca. Red collars indicate assays reported in Table 1. Blue collars are holes that have been drilled but have assays pending.

The objective of the 2013 reverse circulation drill program at North Sierra Blanca is to expand the mine resource base in this higher part of the deposit as well as map the distribution of higher grade vein related mineralization for follow up core drilling on high-grade Yellow Jacket type structural zones. The 100 metre grid spacing designed for initial resource definition will also provide critical geologic and assay information that can be linked with the detailed geophysics for the targeting of additional high-grade structural zones. The fact that three of the four holes reported here encountered higher grade zones suggests that there is high potential for the delineation of more Yellow Jacket type zones within the overall large and expanding NSB target area.

Corvus controls 100% of its North Bullfrog Project, which covers approximately 70 kmÂ² in southern Nevada just north of the historic Bullfrog gold mine formerly operated by Barrick Gold Corporation. The property package is made up of a number of leased patented federal mining claims and 758 federal unpatented mining claims. The project has excellent infrastructure, being adjacent to a major highway and power corridor. The Company’s independent consultants completed a robust positive Preliminary Economic Assessment on the existing resource in December 2012.

The project currently includes numerous prospective gold targets with four (Mayflower, Sierra Blanca, Jolly Jane and Connection) containing an estimated Indicated Resource of 15 Mt at an average grade of 0.37 g/t gold for 182,577 ounces of gold and an Inferred Resource of 156 Mt at 0.28 g/t gold for 1,410,096 ounces of gold (both at a 0.2 g/t cutoff), with appreciable silver credits. Mineralization occurs in two primary forms: (1) broad stratabound bulk-tonnage gold zones such as the Sierra Blanca and Jolly Jane systems; and (2) moderately thick zones of high-grade gold and silver mineralization hosted in structural feeder zones with breccias and quartz-sulphide vein stockworks such as the Mayflower and Yellowjacket targets. The Company is actively pursuing both types of mineralization.

A video of the North Bullfrog project showing location, infrastructure access and 2010 winter drilling is available on the Company’s website at http://www.corvusgold.com/investors/video/. For details with respect to the assumptions underlying the current resource estimate and preliminary economic analysis, see the technical report entitled “Technical Report and Preliminary Economic Assessment for the Mayflower and North Mine Areas at the North Bullfrog Project, Bullfrog Mining District, Nye County, Nevada” dated December 6, 2012 and available under the Company’s profile at www.sedar.com.

Jeffrey A. Pontius (CPG 11044), a qualified person as defined by National Instrument 43-101, has supervised the preparation of the scientific and technical information (other than the resource estimate) that form the basis for this news release and has approved the disclosure herein. Mr. Pontius is not independent of Corvus, as he is the CEO and holds common shares and incentive stock options.

Mr. Gary Giroux, M.Sc., P. Eng (B.C.), a consulting geological engineer employed by Giroux Consultants Ltd., has acted as the Qualified Person, as defined in NI 43-101, for the Giroux Consultants Ltd. mineral resource estimate. He has over 30 years of experience in all stages of mineral exploration, development and production. Mr. Giroux specializes in computer applications in ore reserve estimation, and has consulted both nationally and internationally in this field. He has authored many papers on geostatistics and ore reserve estimation and has practiced as a Geological Engineer since 1970 and provided geostatistical services to the industry since 1976. Both Mr. Giroux and Giroux Consultants Ltd. are independent of the Company under NI 43-101.

The work program at North Bullfrog was designed and supervised by Russell Myers (CPG 11433), President of Corvus, and Mark Reischman, Corvus Nevada Exploration Manager, who are responsible for all aspects of the work, including the quality control/quality assurance program. Â On-site personnel at the project log and track all samples prior to sealing and shipping. Quality control is monitored by the insertion of blind certified standard reference materials and blanks into each sample shipment. All resource sample shipments are sealed and shipped to ALS Chemex in Reno, Nevada, for preparation and then on to ALS Chemex in Reno, Nevada, or Vancouver, B.C., for assaying. Â ALS Chemex’s quality system complies with the requirements for the International Standards ISO 9001:2000 and ISO 17025:1999. Â Analytical accuracy and precision are monitored by the analysis of reagent blanks, reference material and replicate samples. Finally, representative blind duplicate samples are forwarded to ALS Chemex and an ISO compliant third party laboratory for additional quality control. McClelland Laboratories Inc. prepared composites from duplicated RC sample splits collected during drilling. Bulk samples were sealed on site and delivered to McClelland Laboratories Inc. by ALS Chemex or Corvus personnel. All metallurgical testing reported here was conducted or managed by McClelland Laboratories Inc.

Corvus Gold Inc. is a resource exploration company, focused in Nevada, Alaska and Quebec, which controls a number of exploration projects representing a spectrum of early-stage to advanced gold projects. Corvus is focused on advancing its 100% owned Nevada, North Bullfrog project towards a potential development decision and continuing to explore for new major gold discoveries. Corvus is committed to building shareholder value through new discoveries and leveraging noncore assets via partner funded exploration work into carried and or royalty interests that provide shareholders with exposure to gold production.

Cautionary Note Regarding References to Resources and Reserves

National Instrument 43 101 - Standards of Disclosure for Mineral Projects (“NI 43-101”) is a rule developed by the Canadian Securities Administrators which establishes standards for all public disclosure an issuer makes of scientific and technical information concerning mineral projects. Unless otherwise indicated, all resource estimates contained in or incorporated by reference in this press release have been prepared in accordance with NI 43-101 and the guidelines set out in the Canadian Institute of Mining, Metallurgy and Petroleum (the “CIM”) Standards on Mineral Resource and Mineral Reserves, adopted by the CIM Council on November 14, 2004 (the “CIM Standards”) as they may be amended from time to time by the CIM.

This news release contains information with respect to adjacent or similar mineral properties in respect of which the Company has no interest or rights to explore or mine. The Company advises US investors that the mining guidelines of the US Securities and Exchange Commission (the “SEC”) set forth in the SEC’s Industry Guide 7 (“SEC Industry Guide 7”) strictly prohibit information of this type in documents filed with the SEC. Readers are cautioned that the Company has no interest in or right to acquire any interest in any such properties, and that mineral deposits on adjacent or similar properties are not indicative of mineral deposits on the Company’s properties.