Expansion of High-Grade Yellowjacket Deposit Along Strike and at Depth

Exploration of “Yellowjacket-like” systems at Jolly Jane and Road Fault

Vancouver, B.C… Corvus Gold Inc. (“Corvus” or the “Company”) - (TSX: KOR, OTCQX: CORVF) announces the start of its planned aggressive 2014 exploration drill program at its 100% controlled North Bullfrog Project in Nevada.  The program is scheduled to include an initial phase of diamond drilling totalling 4,000 metres to commence in early February.  The primary objective of phase one is to try and expand the Yellowjacket deposit along strike and at depth.  A second phase of drilling, consisting of 15,000 metres, is scheduled to start in late May.  The second phase program is designed to focus on adding high-grade resources and includes initial testing of the largest and highest priority new high-grade targets in the District such as the Jolly Jane/Road Fault area.  Recent exploration results from this area, which has a large high level surface alteration system similar to the upper levels of the Yellowjacket, have indicated that it could potentially host a high-grade system much like the Bullfrog deposit.

Jeff Pontius, Chief Executive Officer, stated: “The success of and knowledge gained from the 2013 drill program has allowed us to understand and target the areas with tremendous potential for high-grade vein systems in the North Bullfrog District.  On the heels of one of the most exciting new Nevada discoveries in a long time, we at Corvus are expecting great things from our focused and aggressive 2014 program and to begin unlocking the real potential of this new Nevada gold District.”

The Yellowjacket vein system has now been drilled over a strike length of 800 metres and 140 metres below the surface but remains open in all directions, particularly to the North as shown by hole NB-13-369 (37m @ 3.2 g/t gold) and NB-13-372 (28m @ 2.9 g/t gold) and also at depth, as shown by hole NB-13-370 (42m @ 4.9 g/t gold) which was drilled to a vertical depth of 170 metres.Â Geologic indications in hole NB-13-223 show that the main high-grade structural zone continues to the North for at least 200 metres farther and remains open (Figure 1). Â Following the vein north will be the highest priority in 2014. Â To date, only two holes have tested the system to depths of greater than 120 metres below the surface and, as in hole NB-13-370, the grade and width of the system appears to improve at depth as it did in the historic Bullfrog Deposit which was mined by Barrick Gold Corporation and located 10 kilometres to the south.Â This expansion potential for the Yellowjacket system will also be a primary target in the first phase.

Other Targets in the Sierra Blanca Area

Figure 1: The Yellowjacket Zone, highlighting the zone of fault interaction between the Liberator Fault and the Vein Fault where mineralization is focussed.  Red collars and drill traces are mentioned in the text. 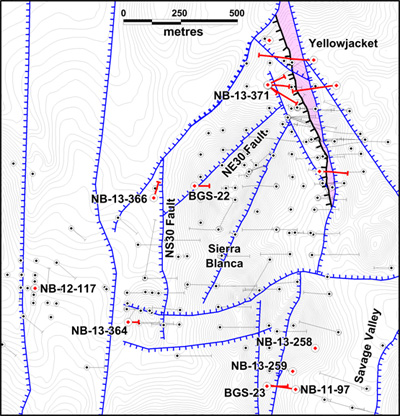 Figure 2: The Sierra Blanca Area highlighting drill holes with anomalous high-grade mineralization which represent follow-up targets for 2014.  Red collars and traces indicate holes mentioned in the text.  BGS holes were drilled by a former operator of the property, but results are considered reliable.

This target is defined by a strong surface rock alteration feature called opalite that develops above deposits like Yellowjacket and the historic Bullfrog mine.Â This opalite material has formed along a major north south structural trend near the Connection deposit and east of the Jolly Jane deposit (Figure 3). Â This opalite is similar and known to be the same age as the material that is found at Â Barrick’s Bullfrog Vein which yielded 2.5Moz of gold (source: USGS & Barrick Gold Corporation reports) before the mine closed in 2000.

In 2013, during the construction of a power line east of the Connection target, a number of road cuts exposed opalite (Figure 3).  The elevation of this opalite is similar to that at the Road Fault and in the Connection area suggesting this is a very large alteration system that could have a focus point along the Road Fault Jolly Jane structural zone and be the main high-grade feeder to mineralization in the area much like Yellowjacket is for the Sierra Blanca area.  During Phase 1 of the 2014 program the opalites in this area will be mapped and analyzed to determine the highest temperature areas to then target for drilling in the second phase of exploration later in the year. Figure 3: Distribution of opalite alteration occurrences in the North Bullfrog Project area.  This alteration forms above boiling zones where epithermal gold veins may have formed.

Corvus controls 100% of its North Bullfrog Project, which covers approximately 68 km² in southern Nevada just north of the historic Bullfrog gold mine formerly operated by Barrick Gold Corporation.  The property package is made up of a number of leased patented federal mining claims and 758 federal unpatented mining claims.  The project has excellent infrastructure, being adjacent to a major highway and power corridor.

Jeffrey A. Pontius (CPG 11044), a qualified person as defined by National Instrument 43-101, has supervised the preparation of the scientific and technical information that form the basis for this news release and has approved the disclosure herein.  Mr. Pontius is not independent of Corvus, as he is the CEO and holds common shares and incentive stock options.

The work program at North Bullfrog was designed and supervised by Russell Myers (CPG 11433), President of Corvus, and Mark Reischman, Corvus Nevada Exploration Manager, who are responsible for all aspects of the work, including the quality control/quality assurance program.  On-site personnel at the project log and track all samples prior to sealing and shipping.  Quality control is monitored by the insertion of blind certified standard reference materials and blanks into each sample shipment.  All resource sample shipments are sealed and shipped to ALS Chemex in Reno, Nevada, for preparation and then on to ALS Chemex in Reno, Nevada, or Vancouver, B.C., for assaying.  ALS Chemex’s quality system complies with the requirements for the International Standards ISO 9001:2000 and ISO 17025:1999.  Analytical accuracy and precision are monitored by the analysis of reagent blanks, reference material and replicate samples.  Finally, representative blind duplicate samples are forwarded to ALS Chemex and an ISO compliant third party laboratory for additional quality control.

Corvus Gold Inc. is a North American gold exploration company, which is focused on advancing its 100% controlled Nevada, North Bullfrog project towards a potential development decision.  In addition, the Company controls a number of other North American exploration properties representing a spectrum of gold, silver and copper projects.  Corvus is committed to building shareholder value through new discoveries and leveraging noncore assets via partner funded exploration work into carried and or royalty interests that provide shareholders with exposure to gold production.

This news release contains information with respect to adjacent or similar mineral properties in respect of which the Company has no interest or rights to explore or mine.  The Company advises US investors that the mining guidelines of the US Securities and Exchange Commission (the “SEC”) set forth in the SEC’s Industry Guide 7 (“SEC Industry Guide 7”) strictly prohibit information of this type in documents filed with the SEC.  Readers are cautioned that the Company has no interest in or right to acquire any interest in any such properties, and that mineral deposits on adjacent or similar properties, and any production therefrom or economics with respect thereto, are not indicative of mineral deposits on the Company’s properties or the potential production from, or cost or economics of, any future mining of any of the Company’s mineral properties.